Multithreading is a process of executing more than one thread simultaneously. The main advantage is:

3) What are the states associated with the thread?

The life cycle of a thread is similar to the life cycle of processes running in an operating system. During its life cycle, the thread can move from one state to another. However, it depends on the operation performed on it.

5) What are the thread states?

Following are the different thread states:

New: A thread which is just instantiated is in the new state. When a start() method is invoked, the thread becomes the ready state. Then it is moved to the runnable state by the thread scheduler. 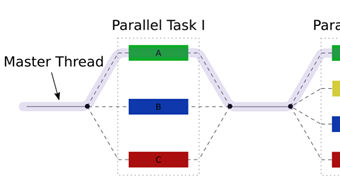 6) What are the major differences between Thread and Process?

Livelock occurs when all threads are blocked and not able to execute because of the unavailability of required resources, and non-existence of any unblocked thread.

Livelock can occur in the following conditions:

However, it may happen in the following scenarios

11) What is the meaning of busy spin in multi-threading?

Busy spin is a technique that concurrent programmers employ to make a thread wait on certain condition. This is quite different from traditional methods like wait() and sleep()which all involves relinquishing CPU control. This method does not require abandon CPU, instead it the just runs the empty loop.

12) What is context-switching in multi-threading?

It is the process of storing and restoring of CPU state. This helps to resume thread execution from the same point at a later point in time. It is one of the essential features for multitasking operating system and support for the multi-threaded environment.

13) Why Thread behavior is unpredictable?

We can say that thread behavior is unpredictable because the execution of Threads depends on Thread scheduler. One should remember that every thread scheduler has a different implementation on different platforms like Windows, Unix, etc

14) How can you pause the execution of a Thread for a certain amount of time?

15) What are numerous ways in which a thread can enter the waiting state?

A thread can enter the waiting state by the following ways

16) What happens if we don’t override a run method?

17) What is the major difference between Thread.start() & Thread?run() method?

Thread.start() method (native method) of Thread class does the job of running the Thread.A run() method in a thread. So, if we directly call Thread.The run() method also execute in the same thread. Thus it will never solve the purpose of creating a new thread.

There are two methods to create a thread in java.

19) What is the meaning of Thread Priority?

Every thread has a priority. However, a higher priority also gets precedence in execution. However, it also depends on Thread Scheduler implementation which is OS dependent. It is possible to the change the priority of the thread, but it does not give assurance that higher priority thread will get executed first.

The join() method waits for a thread to die. It forces all the running threads to stop executing till the time the thread joins to complete its job.

21) What is Java Shutdown Hook?

22) What are the two main uses of volatile in Java?

Threads are allowed to hold the values of variables in local memory If a variable is marked as volatile, then every time the same variable is used, it must be read from the main memory.

In the same way, every time the variable is written, the value must be stored in main memory.

23) How can you share data between two thread in Java?

We can get data between threads by using a shared object, or concurrent data structure like BlockingQueue. It implements a producer-consumer pattern using wait and notifies methods. It also involves sharing objects between two threads.

24) How can multiple threads be controlled simultaneously?

Multiple threads can be simultaneously controlled if they are created in a ThreadGroup object.

25) What is a blocking method in Java?

26) What is the main difference between wait () and sleep () method?

27) What is an immutable object? How can it help in writing a concurrent application?

Any object can be considered unchallengeable if its state does not change after it is constructed. Immutable Objects are used in creating simple, reliable, and concurrent applications.

For creating object immutable, it is important to make the class and its member final so that once objects get created, it’s state doesn’t modify.

28) Tell me the difference between yielding and sleeping?

When a task invokes its yield() method, it returns to the ready state.

When a task invokes its sleep() method, it returns to the waiting state.

ThreadPool is a pool of threads that reuses a fixed number of threads to execute the specific task.

30) What is the use of Synchronized keyword?
Synchronized keyword can be applied either to the static or non-static method. Using  Synchronized only one thread can access synchronized methods. However, in the situation where there are multiple threads which are trying to access the same method. At that time, other threads have to wait for the execution thread. It also provides a lock on the object to prevent a race condition.

31) What is a volatile keyword?

Volatile keyword is a qualifier which is applied to a variable when it is declared. It tells the compiler that the value of the variable may change at any time–without any action being taken by the code.

32) What are the main differences between notify and notifyAll in Java?

Notify () method doesn’t provide any way to choose a particular thread, that’s why it’s only useful when a single While notifyAll() sends a notification to all threads. It also allows them to compete for locks. It also ensures that at least one thread will proceed further.

33) Which JVM parameter is used to control the stack size of a thread?

To control the stack size of Thread in Java Xss parameter is used.

34) Can you start a thread twice in Java?

No, once a thread is started, it can’t be started the second time.

35) What is the purpose of using the yield method of thread class?

36) When can we say that threads are not lightweight process in java?

37) Can It is possible to synchronize the constructor of a Java Class?

38) What is transient variable?