A server-side component, which manages the architecture for constricting enterprise applications and managed is called Enterprise JavaBeans(EJB).

2. When was EJB developed?

EJB was taken over by Sun Microsystems in 1999.

5. What were Entity Beans?

Entity Beans were presented in the earlier versions of EJB consisting of persistent data in distributed objects. 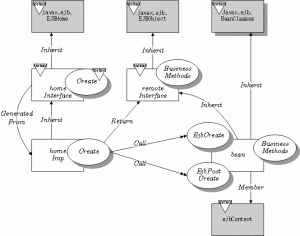 7. What are versions of EJB?

A collection of synchronized specifications and procedures, which enable solutions regarding deploying, developing supervising multi-tier server-centric applications, is called J2EE.

The changes made are:

12. Which is more beneficial: Stateful or Stateless Bean?

If a conversational state is needed then, Stateful mode is preferred while Stateless paradigm is preferred for a single business process.

13. Which is more beneficial: CMP or BMP?

14. How is consistency maintained by Stateful Session through transaction updates ?

The data consistency is maintained by updating their fields every time a commitment of the transaction is made.

15. Is ejbCreate () method mandatory while defining a Session Bean?

EjbCreate () as being part of the bean’s lifecycle, therefore, it is not mandatory for ejbCreate () method to be present and there will be no errors returned by the compiler.

This is a method of binding a name to a specific object by giving an interface like javax.naming.Context.

Implementation of available methods in the interface of context such as a context called javax.meaning.InitialContext.

An EJBContext object, the SessionContext is used for accessing the information and container services.

Yes, remove () can be a Stateless Session bean because the life remains the same till the method is executed.

20. Is state maintained by a Stateless bean?

21. Can EJB made to handle multiple transactions?

EJB can be made to handle multiple transactions by enabling multiple Entity beans to handle every database and one Session Bean to retain transaction with the Entity Bean.

24. How can one EJB be called from within another EJB?

An EJB can be called within another EJB by using JNDI which can be used for locating the Home Interface and acquiring the instance.

When the method is called before the persistence storage is written with the bean state, it is ejbCreate ().

When the method is called after the persistence storage is written with the bean state, it is ejbPostCreate ().

When data that did not existed before is inserted, it is read as phantom whereas when data that already existed is changed, un-repeatable occurs.

The act of redeployment, deployment and un-deployment in Web logic when the server is running in EJB is called Hot Deployment.

31. How can a session bean be configured for transactions of bean-managed?

It can be done by setting transaction-attribute in the deployment sector or XML file.

32. Enlist the technologies embraced in J2EE.

The technologies embraced in J2EE are:

33. What do you mean Enterprise JavaBeans (EJB) container?

34. What do you mean by in-memory replication?

When the contents having the memory of a single physical m/c are simulated in all m/c in that cluster, that process is called memory replication.

During runtime, when the changes made in the various properties of server group, are propagated in every associated clone, this process is known as Ripple Effect.

Server group copies are defined as clone. But unlike Server Groups, clones are linked by means of nodes.

37. What do you mean by bean managed transaction?

If the Container is not wanted by the developer for managing transactions, every database operation can be implemented to write the suitable JDBC code.

38. Differentiate, “find a method” from “select method” in EJB ?

39. What do you mean by abstract schema?

An element of an entity’s bean’s deployment descriptor that defines the persistent fields of bean’s and the relationship existing between them is known as Abstract Schema. It is specific for each entity beans which has managed persistence of container.

41. What do you mean by EJB architecture?

A non-visual component involving a transaction-oriented, distributed enterprise application is called Enterprise beans. They are characteristically deployed in containers of EJB and run on servers of EJB.

The three enterprise bean types are:

The basic requirement of a CMP is an abstract class which the container extends and gets the methods implemented required for managing the relationships.

43. How can Enterprise JavaBeans be accessed from Active Server Pages?

Enterprise JavaBeans can be accessed from Active Server Pages by:

44. Is having static initializer blocks legal in EJB?

It is legal technically, but static initializer blocks have been used in executing pieces of code before the final execution of any method or constructor when a class is instantiated.

45. What changes have been made in EJB 2.0 specifications?

Changes that have been made in EJB 2.0 specification are:

46. What do you mean by EJBDoclet?

JavaDoc doclet, an open source is a doclet which generates good stuff related to EJB from comment tags of custom JavaDoc, which are embedded in the source file of EJB.

A query language which provides navigation through a network comprising enterprise beans and objects which are dependent and are defined by methods of container managed persistence. EJB 2.0 was the platform for introduction of EJB QL. It defines methods of finder which are used for entity beans, which has container managed persistence and has portability across persistence managers and containers. It is helpful in two kinds of finder methods: Finder methods, which have Home interface and return objects of entity. Select methods, which remain unexposed for the client to see but which the Bean provider uses.

48. How does EJB invocation take place?

49. Can more than a single table be mapped in CMP?

No, more than one table cannot be mapped in a single CMP.

Yes, it is allowed in cases where data is not inserted by using Java application.